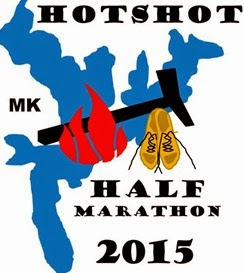 The Inaugural Hotshot Half Marathon was held at Bullards Bar Reservoir near Camptonville earlier this month. I was able to squeeze it in as a training run a week after American River 50 Mile. The race benefits the Wildlands Firefighters Association and is dedicated in memory of Mike Kelly, a Tahoe Hotshot and Smoke-jumper who was killed when struck by a car in November 2013.

I was excited to run this course; rolling single-track for most of its length, with somewhere north of 2000 feet of gain. Rumor had it that the course was a bit longer than 13.1, which worked well for my training plans for the weekend. 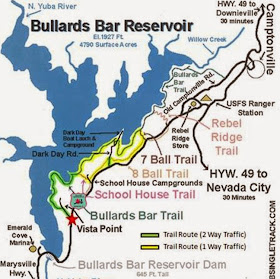 I was surprised to see Bay Area runners Christy and Erica in the parking lot before the race. There was little to no advertising West of the foothills. Turns out Erica had heard about it from someone in Cool, and she was stoked that the results would not be on Ultrasignup.com! I recognized many local runners amongst the throng of firefighters lining up at the start.

I knew the first three quarters of a mile were downhill on a fire road, and that the next 12 miles would be single track or double track trail. So, I went out fast trying to secure a spot near the front of the conga line. The plan worked pretty well; I passed a few people after hitting the trail and settled in at the front of a group. After three miles, I could tell I was running too fast. My legs painfully reminded me about the fifty miles I had run the previous Saturday. I dialed it back a little bit, and the conga line began cruising by me.

By the time I reached the first aid station, I was in need of a pit stop. Fortunately, the course ran right past an outhouse, which I availed myself of for a couple of minutes. I rejoined the conga line and held onto my spot for the next few miles. My Garmin died somewhere in these miles, and the rest of the race I ran on feel. It was quite freeing to be without the data. Not something I would choose to do.

Around the midway point, the course climbs "7-ball trail". I had heard it gained about 800 feet in one mile, but it ended up being really runnable. Another aid station at the top offered fruit and candy, which I enjoyed before beginning the return trip along the ridge above the lake. The next few miles were wonderful downhill running on easy double track. A few runners passed me looking strong, but for the most part I felt like I was holding my own.

By the time the course rejoined the lake-level trail, I was running low on energy. The last three miles seemed to go on forever. Finally, with three quarters of a mile left, the single track gave way to the fire road and one more big climb to the finish. I ran/walked until I could hear the finish line, and ran it in the rest of the way for a 2:23:59 finish (103/226).

The finish line festival had a small town feel. Loaded baked potatoes and chili were available, along with ice cold water, Gatorade and coconut waters. I hung out for an hour or so, cheering in friends and taking an informal poll of those with GPS watches. Most reported somewhere between 1600 and 2600 feet of gain over 13-14.5 miles.

The race was well organized and executed. The spectators were effusive, filling each campground we ran through. I hope they continue this event, as it benefits a great organization and recognizes the important role wild land firefighters play in our community.