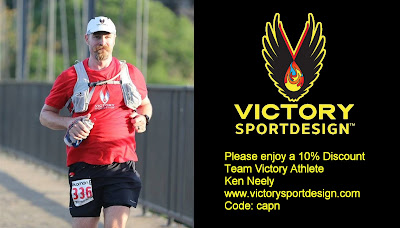 It's official! I remain a Team Victory Athlete for 2018. Use my discount code (capn) to get 10% of all orders in 2018! Victory SportDesign has been a crucial component of my success over the past few years, and I am honored to continue this beneficial relationship. I truly believe their products live up to the hype, and both Twirly and I enjoy being brand ambassadors both at events and just out and about town. When Twirly crews me at a race, she uses the Grizzly to carry my Bear III bag, a collapsible chair, reading material, and lunch to the aid stations. In addition, when I run Angeles Crest 100 as a solo runner later this year, I'll be looking forward to getting to each of my strategically placed Victory gear bags to get the job done! If you aren't familiar with their line-up, check it out here. They're a great way to stay organized on the go.

In other news, I recently ran the Marin Ultra Challenge 50k, and  Lake Sonoma 50 Mile. Both were great learning opportunities, and I'm looking forward to sharing some of that newfound knowledge with you all in the next week or so. I suffered through to the finish at MUC, but Lake Sonoma got the best of me at mile 38. Lots of opportunities for improvement before States!

Go get yourself some new gear, and stay tuned for the race reports...
Posted by Cap'n Q at 8:41 AM No comments: 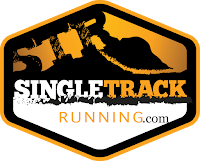 My second training race of 2018 was the FOURmidable 35.5k on February 18th. I had never run an event hosted by Paulo Medina's Singletrack Running. I was not disappointed! Focusing on trail running events "utilizing trails that are not common to most runners", STR has built a reputation worthy of their motto: "if you are going to do something difficult, you should never find just the easy way."

The FOURmidable Running Event covers two days in mid-February, and offers a 50k on Saturday with a 35.5k, half-marathon and 13k on Sunday. Not quite ready for a 50k yet this year, I opted for a slight increase over the Foresthill Divide Loop 30k I ran two weeks prior and went with the 35.5k. Friend David Leeke signed up for the 50k and nailed it, finishing in 17th place!

Sunday morning dawned brisk with a slight breeze; perfect running conditions. The trail was in great shape, not dusty, just a little tacky and very little mud. Beginning on familiar trails, I kept the effort in the "training race" range and made my way towards No Hands Bridge. The FOURmidable event is built around four (formidable) climbs: Cardiac, K2, Knickerbocker and the final climb into Overlook Park. The 35.5k eliminates Cardiac, leaving a THREEmidable course. Almost immediately after the No Hands aid station, the course climbs up the Western States Trail and takes a hard right. A REALLY hard right. K2, or "Training Hill" is a ridiculously steep pitch cut into 3-4 sections. This was where I first learned of Singletrack Running's sadistic sense of humor. At the top of the first section, written in flour on the trail, were the words:

And then, about ten yards later, was written:

"Just kidding, not even close!" 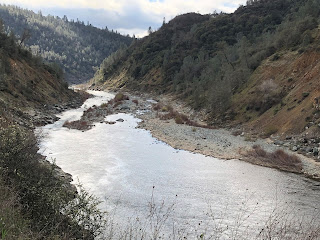 Each of the formidable hills had similar messages scrawled in the dirt. Near the top of Knickerbocker was written "Only ONE Midable left", which I suppose was good news. On the return to Overlook Park, I knew there would be a loss of elevation before the final climb. The course took an ominous left turn onto steep singletrack which brought us almost all the way back to river level from Robie Point. Every step down equaled a step up, and there was some carnage on this section. People were spent! The trudge up to the finish line caused runners to coalesce along the climb, commiserating. An anti-climactic finish, but we jogged it in.

Aside from a wrong turn at the 13k mark, which was immediately obvious due to the large number of runners backtracking, I really enjoyed the course. A blend of buttery singletrack and fire road with no shortage of elevation gain, I think the event is a great early-season test of fitness. The race organization was decent, although the last few aid stations had run out of gels... Having a 50k the day before took its toll on supplies, I guess. They even ran out of beer at the finish line festival, which is totally unacceptable. I mean, come on, this is trail running!

In the end, it is hard to beat the trails of Auburn Recreation Area. So many of us would choose to train there on any given day, it is no surprise that FOURmidable is a well respected and attended event. I'll probably be back in the future. I can hardly remember the climbing already!

Currently training hard for the Marin Ultra Challenge 50k in early March. See you out there! 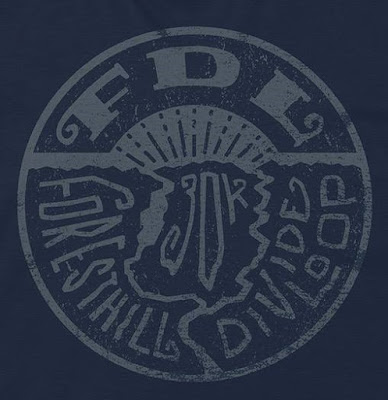 I kicked off my 2018 season with the inaugural Foresthill Divide Loop 30k, organized by Chaz Sheya and the Canyons Endurance Runs crew. The Foresthill Divide Loop trail is a very popular multi-use trail, especially with mountain bikers.The race begins at the Driver's Flat trail head on Foresthill Road, and ends at the staging area about a half mile down the road to Rucky Chucky. Chaz originally designed the course as a loop, but a closure due to erosion repairs at the Mammoth OHV meant an alternate "open-ended" lollipop course with an out-and-back in the middle. 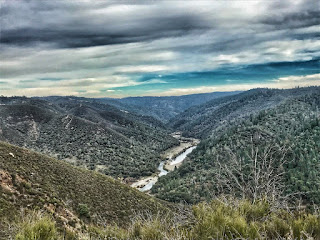 I really enjoyed this race. The rolling single track reminded me of the Lake Sonoma course. Overall, it is very run-able, but the climbing does accumulate. Gorgeous views of the North Fork of the American River canyon appear occasionally as the first four miles traverse along the south side of the canyon. Cool temps and shade made for perfect conditions as the field of about 120 began to spread out on the course. Aid stations were never further than 4 miles from each other, which meant I only needed one water bottle, which I filled with Scratch Labs Green Tea at the start (fellow DPMR member Bill Hunter asked if I was recycling my urine when he caught sight of the color in my bottle), and refilled with Gu Roctane Summit Tea for the rest of the morning. I threw in a gel every 45 minutes and grazed at the aid stations to round out my nutrition. The last four miles were on the south side of the "divide" and were somewhat exposed, compounding the warming temperatures. All in all, a pretty good day. 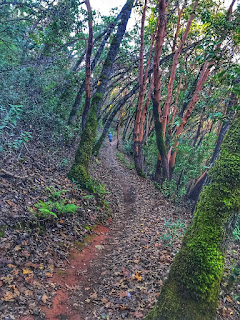 I didn't push the pace at all, as it was a "supported training run" on my schedule. I'm still laying base miles and consistency after taking much of the Fall off last year. My aerobic capacity needs a lot of work and I'm quite heavier than race-weight. The run felt good though, and it was great to see familiar faces on the out-and-back section. I will be hitting this trail often in the coming months as I train for Lake Sonoma and the summer's hundred milers.

Race organization, course marking and all of the volunteers were spectacular. Everyone was in high spirits, and the post race festival (FOUR kinds of chili and plenty of beer) lived up to the hype. This race will become a fixture on my schedule, as my birthday is right around the corner, and I find a good trail race is a good way to mark another trip around the sun.