The Broken Arrow Skyrace was held in California on June 18-19, 2016, in Squaw Valley, California. It joins Speedgoat 50k in Utah and The Rut 50k in Montana in the US Skyrunning series. What sets the Skyrunning series (an international organization encompassing some 200 races in 65 countries) apart from other races is the nature of the courses: altitude above 2000 meters (6600 feet), and climbs up to 30% grade. Events usually center around a vertical kilometer race and an ultra-distance Skyrace. Squaw Valley met these requirements in spades. 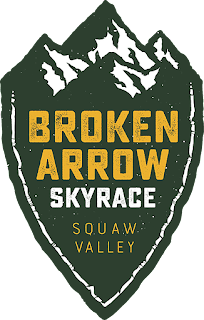 I had originally planned to run the Summer Solstice 12 hour event in San Francisco. It was tentatively scheduled for the same weekend and would provide a good training venue for my goal race, Angeles Crest 100 Mile. I planned to experiment with nutrition sources and remedies on the one mile loop around Crissy Field. Unfortunately, Pacific Coast Trail Runs was unable to acquire their permit this year; apparently Crissy Field was booked for the month of June. I was explaining my predicament to Victor from Victory Sportdesign over a beer a few weeks before the race when he suggested Broken Arrow. I had heard some details about the race, but hadn't considered it until that moment.

"With that much vert, it will be great training for AC," he said. The idea scared me initially, but the more I considered it, the more I knew he was right. I pulled the trigger two weeks before the race.

My training plan from McMillan Run Club was paying dividends. Aerobic fitness was falling into line with peak fitness from years past, and my climbing muscles were not far behind. The race allowed the use of poles, which I knew would help distribute the pain and allow me to continue training the week after the race. No crew or drop bags made planning simple. Show up, run aid station to aid station and take care of myself. It doesn't get much better. The aid stations would provide my go to fuel (Clif Energy Food), and I would carry single use Tailwind packs for my water bottles.

Race weekend, organizers determined there was too much snow on parts of the course, requiring a re-route. They ended up shaving off a couple of miles, but adding about a thousand feet of vertical. The final stats were something around 32 miles and 10,500-11,500 feet of climbing. Not a bad day's work. I set my goal at ten hours and told myself to stay comfortable.


Race morning I drove to Squaw Valley while fueling and sipping my coffee. I arrived an hour before race start, checked in (awesome swag) and got my gear squared away. The course change resulted in a rule change: drop bags would be allowed, so I packed up my Victory bag with my usual desires, tightened up my laces and joined the throng at the starting line.

As advertised, the course went pretty much straight up the valley, following single-track winding through thickets and meadows. I kept my effort in zone 2 for most of the day, and at that altitude, I was moving pretty slowly.

Near the end of the second mile, the conga line I was in took a wrong turn at a trail junction. Some trails had red flags, some had yellow, and some had both. The leader of the line stopped about a half mile from the junction, realizing we were headed away from High Camp, the site of the first aid station. I turned tail and ran back the way we came, shouting "On-on!" when I picked up the true trail. A fellow hasher had followed me, Nicolas from Washington D.C.. We would spend the majority of the race near each other, although most of the course is steep enough to quash any conversation. I confirmed we were on course with the first marshal I saw, and soon enough we were at the High Camp aid station.

From there, the course dropped into Shirley Lakes Basin for a short 1.5 mile loop. The north facing slopes still held soft snow, giving me an opportunity to try glissading. Of course, having not ever really glissaded before, I ended up on my butt every time. A long, snowy climb out brought us to an aid station near the foot of the Escarpment (Big Blue), which we then had to climb. 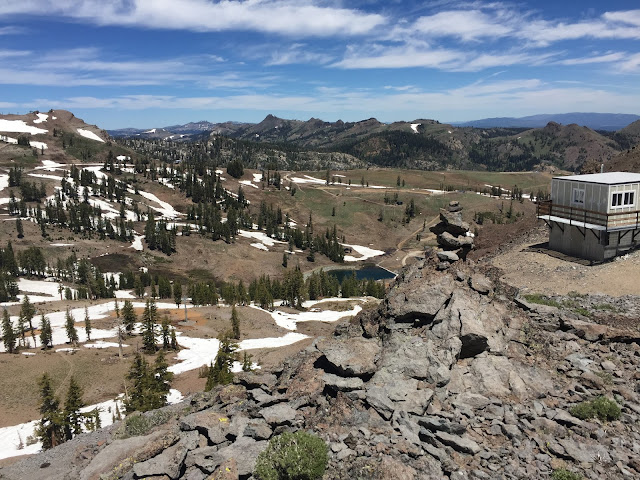 The descent to the valley floor was spectacular. Long traverses through snow fields combined with some steeper pitches that provided more glissading practice made me glad I chose to use poles; they helped brake my descent by dragging them like a paddle.  By the time I returned to  Base Camp my quads were spent. I was only 10 miles in and it had taken three hours. Right on track for a ten hour finish, I thought. Eric Schranz was on the PA announcing runners, and he wished me a good time on the trails when I departed for the rest of the race. Nice touch.

Then, more climbing. First, a series of long switchbacks and a traverse brought the runners near the summit of Snow King Peak. That climb totaled 1300' in three miles. I saw the 26k leaders come screaming down the hill at me as I climbed. They were working hard! Then, as I descended to the fourth aid station at Easy Street, I began to see the 52k leaders. Dakota Jones was power hiking, hands on quads, moving steadily and smoothly. I wanted to stop and watch, but I knew I had a long way to go. Here he was four miles from the finish while I still had 18 miles to go! 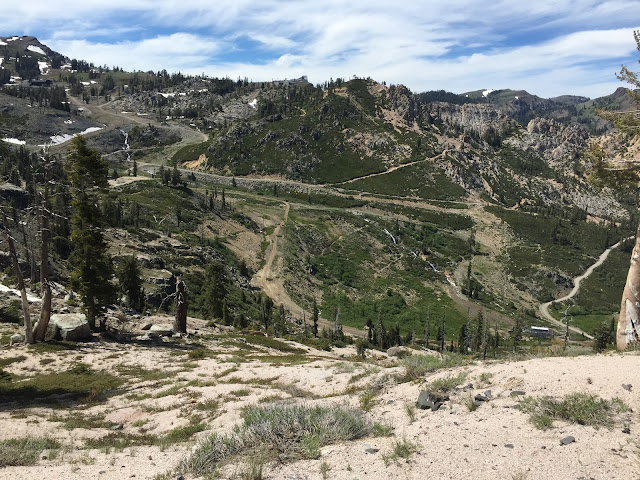 A quick stop at the aid station and then another big climb to the top of KT-22. 1200' in 1.5 miles! More famous faces came at me, including Tim Tollefson, Marin local Galen Burell and Max King. A short descent to a saddle, and then yet another 1200' of climbing in 1.5 miles to the summit of Squaw Peak at almost 9000 feet above sea level. The final approach to the summit was ridiculous: rock scrambling, a rusty 30' ladder and roped up snowfield. Course marshals at the ladder to the peak saw some interesting expressions, I'm sure. My blood sugar was getting low as I climbed the ladder, poles in one hand. I felt the exposure on both sides and focused on getting to the peak safely.

The course retraced its steps through the high country, hitting the Big Blue aid station, Shirley Lakes Basin and High Camp aid station. A long traverse and descent brought runners to the last bit of new trail: the climb up the Headwall face and traverse around Sun Bowl. This section gained yet another 1200', but this time in a much more forgiving 2 miles. From there, it was just two summits, KT-22 and Snow King Peak before the final descent to the Village and the finish line. I ran with a 14 year old named Adam from SoCal for much of this stretch. On the climb to KT-22 I let him go. I was tired and felt like I had gotten my training run in. I took it easy on the final miles, conserving my legs for the next week's training.


I spoke with a few runners who had completed Hardrock, and they all agreed this course was a good primer on the relentless climbing and varied terrain of the iconic course through the San Juan Mountains in Colorado. Most I spoke to claimed it was the hardest 50k they had ever run. For an inaugural event, the race organization was spot on, and the support was excellent (aside from the confusing course marking around the trail junctions). In lieu of running States in June, I think this race could become a cornerstone of my summer racing schedule. Hopefully next time I can race it, instead of turning it into an eight hour training run with a three hour cool down!