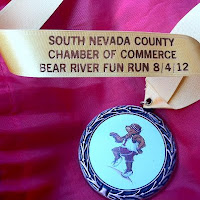 The 2012 Bear River Fun Run 5K, held on August 4th at Bear River High School in Auburn, was my second "A" race of the 2012 season. The Bear River Fun Run is the sixth race of the Gold Country Grand Prix and is a 5K only. The course combines two laps on the school track (the start and finish) with some pavement/asphalt stretches, and the middle mile explores a cross country trail that is paved with gravel at some points.

I made the 5K an "A" race because it is the race where I set a 5K PR in 2011, and I wanted to best that mark before settling into the fall training cycle, during which I am focusing on distance instead of speed. So, this race has been my focus for the entire summer. Twice a week speed workouts and weekly hilly trail runs had me in great shape at the Freedom Run 5K in July, at which I set a new PR, much to my surprise. Unfortunately, the new mark (21:56) made my goal of setting a new PR at Bear River somewhat daunting, which led to more difficult speed workouts over the last three weeks. My training leading up to the race was lackluster. A niggle in my left Achilles tendon had me gun-shy to do too much mileage. Race simulation repeats at sea level were difficult, and I labored to keep my pace up for an entire workout. My new goal of breaking 21 minutes would require a 6:46/mile pace, and I lacked confidence that I could keep that up for 3.1 miles.

I stood at fifth place in the Grand Prix standings when I toed the line on the dirt track. My main competition in the men 40-49 age group, Kevin, stood next to me. Kevin has been second place to my third in three Grand Prix races thus far, and I came within 30 seconds of beating him at the Freedom Run 5K. If I couldn't break 21 minutes, beating Kevin was my "B" goal. While we waited for the start, Kevin let me know he was injured and likely would not be able to challenge the 21 minute mark. He has a habit of getting far enough in front of me that I cannot catch up, so I took his admission with a grain of salt!

The starter decided to test the starting gun prior to the actual start, "so that everyone knows what it sounds like". Even though he warned us, it was difficult to suppress the rush of adrenaline that accompanied the sound of the pistol. After some nervous laughter from the racers,  the RD got the race started.

I intended, as always, to negative split the race; running 6:50/6:45/6:40 miles would have been ideal, allowing me to kick to a sub-21 minute finish if I had anything left in the tank. Of course, as the field entered the first turn, I found myself behind Kevin, who was out of the gate at about 5:45/mile. I checked my heart rate, which was above my goal of 165, and decided to let him go until we left the track. I stayed within 3-5 meters of him until we got to the first mile split in 6:32, much faster than I had intended to start.

In the middle mile there were a few rises in the trail. I felt strong climbing, and made some key passes which brought me to Kevin's shoulder. As I pulled alongside him, Kevin welcomed me and gave me some encouragement as I pulled ahead on the next hill. I backed off a bit on the gravel, and ran the second mile in 7 flat.

The third mile was spent trying to stay relaxed and open my stride to stay ahead of those I had passed. My pace was faltering a bit, and once I felt confident I had put Kevin behind me, I pretty much talked myself out of sub-21. I needed to push harder to get there, but I had nothing left for a kick. I clocked a 6:53 mile as I entered the track for the last lap. A couple of runners passed me on the track, but it did not change the points I received; one was in the 50-59 age group, and the other ended up winning the 20-29 age group.

My final time of 21:27 is a new PR for the 5K, so I accomplished my primary goal. Sub-21 minutes will have to wait until next year. My third place finish for men 40-49 puts me in fifth place again, but I am only 9 points out of second place (Kevin), and I hope to have a good showing at the Kellerman 10K in two weeks. I look forward to a week off before transitioning to my marathon training program, focused on the California International Marathon in Sacramento, December 2nd.

UPDATE: I overlooked one of the most important aspects of a race report - acknowledging the race organizers and volunteers! The course was well-marked, there were TWO aid stations, and the Bear River XC team did a great job of putting the event together. Thanks to all who gave their time, it resulted in a wonderful morning.