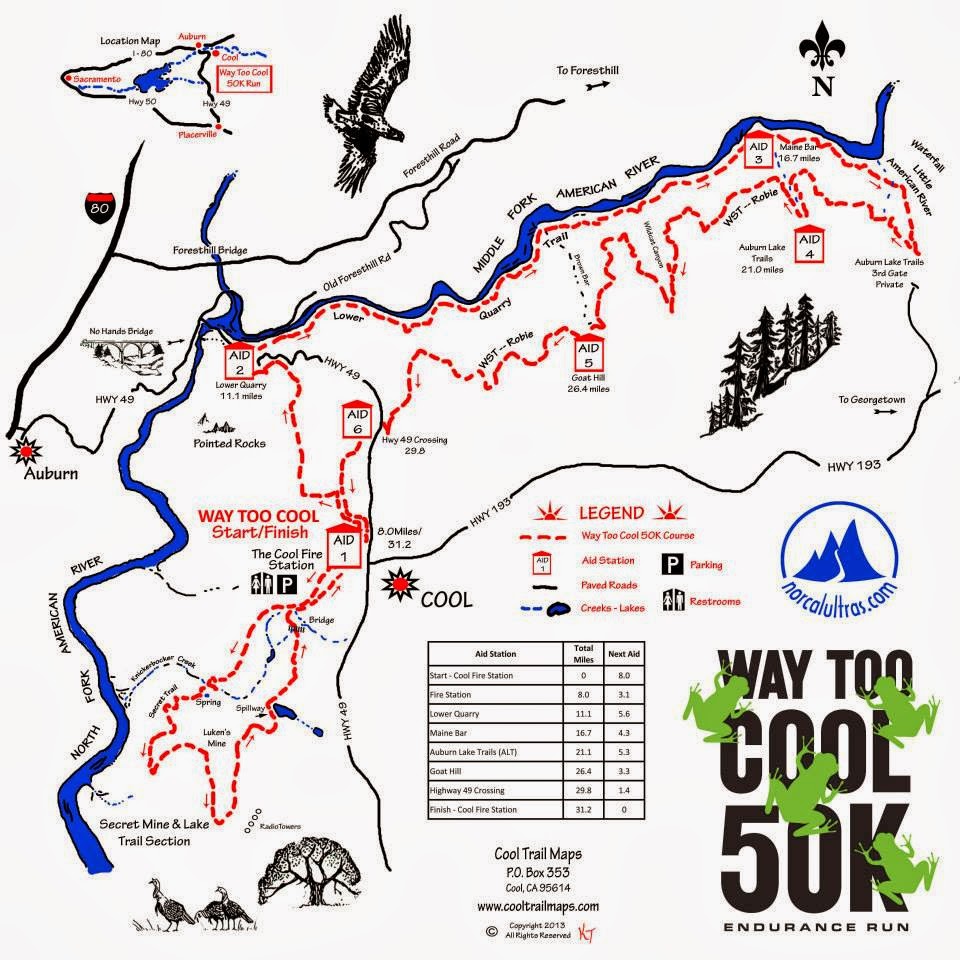 NorCal Ultras' Way Too Cool 50k is too cool to miss! The 2014 edition was my second go at this course; an opportunity to race a virtual version of myself. Not just any version, but my 50k personal record. Differences in courses and conditions make comparing performances more of a thought exercise, but that doesn't stem the urge to better myself.

I'll show that younger guy who's got more grit.

The ego doesn't care that previous performances were those of a younger, leaner me. Arguing with that ego occupies many of the late miles, and some of the early ones too. 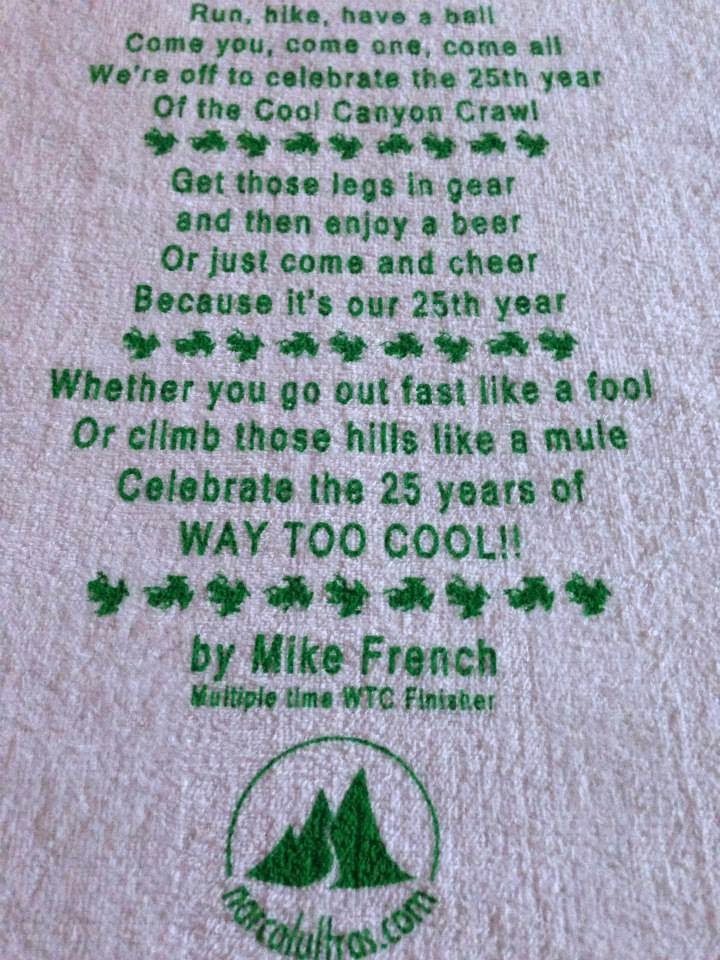 My training has turned a corner recently. I finally feel my hip and groin are strong enough to begin increasing volume. To race or train? I left that question for the race start. Comparing last year to this year, I had 6% more distance (387/364) in 42% more runs (51/36). Unlike 2013 I had not run further than 16 miles since December's TNFEC 50.

Race morning was clear and cool, with promises of a warm afternoon. I saw many familiar faces amongst the 1000 runners this year, and had fun catching up with friends from all over Northern California. David and I were in wave 1, with the big boys. Karl Meltzer and Don Freeman were on the mic, getting the parade started down the brief paved start.


Once underway, I decided to push the Olmstead Loop. I had two handheld bottles: one with 400 calories of Tailwind and one with plain water. In 2013 I had averaged around 10:30/mile for the 8 mile section and realized in hindsight I could have gone out a little faster. This year I pushed for position until the first creek crossing, then fell into the conga line. Feeling strong and enjoying the gorgeous weather, I managed to finish the section about a minute per mile faster than the previous year. I dropped my now empty handhelds with Twirly and switched to my Nathan HPL#020 pack and one handheld. The weight of the pack felt uncomfortable. I had 900 calories of Tailwind pre-mixed in the reservoir, and another 900 calories of dry powder to mix with a refill. In the handheld I used plain water.


Leaving the festive start/finish area for the second time, it took me a couple of miles to get comfortable in the new gear. The downhill towards No Hands Bridge and the first Highway 49 crossing is a favorite trail of mine, but I did not attack it as I usually do. Despite the strong start, I was already having an inner dialogue with my ego. Also, I was beginning to feel a familiar rumbling in my gut.


Twirly managed to arrive at the Highway 49 aid station just as I was ducking into the porta-potty, and David was right behind her. The pit stop was brief, and soon enough I was cruising through the aid station without stopping. David and I ran a few miles of Quarry Road together before I dropped my zip lock bag of MAP, skidding to a halt. I was able to keep him in sight until American Canyon, but he put a gap on me there. I felt strong; no niggles, but a little slow.


Quarry Road is douche grade, but my leg turnover wasn't there. I shuffled along, letting a steady stream of faster folks trickle by. At the crest of the first hill, I found Eric Schranz of Ultrarunnerpodcast.com snapping photos and drinking a beer.

"Is Alex killing it?" I asked, referring to pre-race favorite Alex Varner. Alex had been posting 100+ mile weeks in Strava.

"Vargo was leading", Eric replied. Chris Vargo is Alex's team-mate on the new Nike Trail Running Team. They would go on to finish 1-2, separated by only 20 seconds.

I ran through the next aid station at Maine Bar, and made my way up  the climb in American Canyon. I was holding my own now that we had returned to the single track. I began watching the time, knowing that to best my PR I would need to leave the Goat Hill Aid Station by 12:20.

The runnable miles approaching Auburn Lake Trails aid station at mile 21 were fast as I hooked onto a freight-train on the single track. Runners choked the aid station, and I had no choice but to navigate them as I needed to refill my reservoir. When I opened my pack, I realized I was way behind on Tailwind consumption. I should have stuffed a bunch of food in my mouth immediately, but of course, I did not. Adding 900 calories of Tailwind powder to the partially full reservoir resulted in a super concentrated version which was difficult to drink. It did make catching up on fuel a little easier though.

On the way out of A.L.T., I ran with Kimberly White for a few minutes. Kim and I have raced each other a few times in the Marin Headlands; she usually beats me in the end. We were both vying for the Sierra Trailblazers Running Club administrative entry to Western States this year. She congratulated me for getting the golden ticket, as she had run States a couple times already. "You'll have a blast, the race is the easy part, just train hard and it will be fun" she counseled before pulling away.

With only Goat Hill between me and the marathon split, I once again settled in with a train of runners. The pace felt hard, and I was feeling apathetic and sore. I managed to hold my place until just before the hill, when the trail widened and I slowed. A glance at my watch told the story. I was already 17 minutes off pace. I was in training run mode.

I climbed Goat Hill, passing a few runners who were having GI or cramping issues. One woman was in tears, consoled by a fellow runner. Strava sponsored a segment for the climb; prizes were on the line. I had already shifted gears into training-run mode and was just happy to crest the hill. The Goat Hill Aid Station is always a big party at the top. I filled my handheld with ice water and trudged onward. The time was 12:37; still 17 minutes behind my PR from 2013.

Consciously avoiding Ibuprofen has allowed me get some experience running sore. I have depended on 600-1800 mg for 50k-50 mile races until this year. My doctor has given me permission to consume up to 3000 mg in a 24 hour period. In preparation for States, where I plan to wait until mile 62 at Foresthill to even consider taking any, I am avoiding using it at all.

I enjoyed the final 10k of the race as the course followed a short section of the Western States finishing miles. Nate Dunn from Ultrasportslive.tv welcomed me to the Upper highway 49 crossing Aid Station. I grabbed some ice water and a few Tums, just like 2013.


The final mile was practice for the buckle shuffle; I was tired, sore, and ready for a massage and a beer! Twirly and David caught some video of me finishing. I went directly to the Monsters of Massage tent and put my name on the waiting list. Victor, my pacer from TNFEC and owner of Victory Sportdesign was pouring hill 88 IPA, which went well with the pizza!

Somehow, I managed to make up 5 minutes in the final 10k for a time of 5:35; just 12 minutes off my PR of 5:23. So in the end, I'll call it a success. I stopped at one aid station for a refill of my reservoir, and another two just for ice water and Tums. I failed to eat banana and nut butter at any aid station, something that worked well for me at TNFEC 50. I think I may have been able to stave off the apathy if I had stayed abreast of my fueling.

What a great day for a race! The volunteers were awesome, and many. Spectators dotted the course and were effusive with their encouragement. Way Too Cool 50k really is a top-notch event. A bucket-list ultra to be sure. I'll have a hard time staying away from this one.


Even Smith got some props at the end.