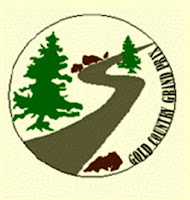 One of my 2012 goals was to place in the top three for men aged 40-49 in the Gold Country Grand Prix race series, running the 10K's whenever they were offered. My previous best, running the 5K's, was 5th place (M30-39 in 2011), and I had not run the last half of the series due to injury. If I could stay healthy, I figured a top three would be an easy goal to achieve. However, my competition for the M40-49 age group was faster than I had anticipated!

Points were awarded to age group finishers in each distance as follows:

A runner's top ten races were counted; the low race was discarded if they ran all eleven. The top three in each age group received awards, and everyone who ran ten races received a free voucher for one race entry in the next year's Grand Prix. The series began with the Daffodil Run, a street race in Penn Valley, which takes the runner along a flat out and back road run surrounded by pastures. The race begins and ends at Western Gateway Park. I skipped the 2012 event to run my first half marathon in San Francisco.

Second is the Spring Run, a street race incorporating dirt roads along Deer Creek in Nevada City. The Spring Race has more vertical, and forces the finishers to climb 100 feet to the finish at the top of Broad Street in downtown Nevada City. I felt strong in this 10K, taking 3rd place (out of three).

The Community Run starts on the street, but spends most of the race winding through a hilly orchard and along an irrigation ditch before returning to finish at Twin Cities Church outside Grass Valley. My fitness did not serve me well on the hills in this course, but I finished in 3rd place again (out of six). At this point, I began recognizing that the second place finisher in the 10K's, Kevin, was a step or two faster than I, and my competitive juices began to flow. If I was going to crack the top three, I was going to have to start finishing in front of him.

The Harmony Run is a road run in my neighborhood near Scott's Flat Lake outside Nevada City. The course follows my favorite training route for a five mile (8K) out-and-back including rolling hills and not much flat. Once again, I finished in 3rd place (out of six), and Kevin once again beat me. The competition for second place began to take shape between Kevin, Machen and myself, with Rob running away with first place, having won 10 points at every event.

The Freedom Run is held on the cross country course at Nevada Union High School in Grass Valley. I set a PR at the 2012 event, and took sixth place (to Kevin's fifth, grrr). At this point in the series, I realized that if I could not begin finishing in front of Kevin, I would end up on the bubble (4th place) at the end of the year.

The Bear River Fun Run was an "A-Race" on my 2012 schedule. The course follows pavement and trail around the grounds of Bear River High School. I had set a 5K PR there in 2011, and had trained hard all summer to improve my leg turnover and aerobic fitness. A new PR and third place provided a boost, as I finished in front of both Machen and Kevin. Kevin pulled up with an injury at this race and would not compete in the rest of the series. In hindsight, I had my top three locked up at this point, but trying to best Machen for second place filled in the drama for the remainder of the series.

The Kellerman Batwa Challenge  was held in Nevada City and incorporated paved and gravel roads rolling through an old mining claim before looping through Nevada City. Rob and Machen both ran the 5K, allowing me to get an age group win in the 10K. I broke in some new Hoka One Ones in this race, using their extreme cushioning to bound down the steep paved hills on the course.

The Cystic Fibrosis 5K was a tear through the trails of Empire Mine State Park, and I managed to pull away from Machen early for a second place finish. With two races left in the series, only 3 points separated 2nd and 3rd places in the Men 40-49 age group.

The Falling Leaves Run once again followed the surface streets of Nevada City and along Deer Creek. Rob ran, and won, the 5K, once again leaving the 10K open for my second age group win of the series, and Machen took 2nd in the 5K, leaving us tied with one race remaining: the ringer-filled Turkey Trot.

With so many unknowns from out of town, the Turkey Trot could have gone either way. Apparently the masters runners like the 10K's these days, as I do, because there were 10 M40-49 runners in the top 50 finishers of the 10K, leaving me in 9th place. Machen took 5th in the 5K, beating sixth place by 15 seconds (I think I could have beat him head to head, but I stuck with my goal of running the 10K's instead of changing strategies to accomplish a goal I had not set - 2nd place). In the end, Machen bested me by two points for the second spot on the podium.

I set out to place in the top three, and I ended up third in my age group. I really appreciate the motivation that participating in the series provided. To do well, an average runner simply needs to stay healthy and consistently participate in the races. The fact that the 5K and 10K racers are competing against each other adds a layer of strategy and potential for variety in your race calendar. Machen, Kevin and I fostered a healthy competition which evolved over the year, which doesn't come easy for us middle-age guys, short of going out for a softball team. Second place came down to 15 seconds after an entire season of racing!

Looking at the final standings for the 2012 Grand Prix, one can see that some other age groups are fairly competitive as well: first place for men over 70 beat second place by only five points, the top three women aged 60-69 were separated by only four points, and second place in the women's 19-29 age group was decided by two points. Whatever your age, the Gold Country Grand Prix offers healthy competition on some absolutely beautiful courses. The foothills offer awesome weather, varied terrain and small town hospitality. If you have the opportunity, please consider one (or more) of the races offered in scenic Gold Country. I do not intend to compete for the series in 2013, as my sights are set on cutting my teeth at ultra distances next year. I will, however, be selecting a few convenient weekends to compete. The races are all for a good cause, and the terrain and scenery are well worth the trip.
Posted by Cap'n Q at 8:06 AM